Dr. Kumar received his Master of Science in Molecular Biophysics and Biochemistry in August 2011 from Illinois Institute of Technology in Chicago, IL. After four years of research experience in academia, focused on cardiac physiology at Loyola University Chicago, Mohit joined the PhD program at University of Cincinnati in 2016 under the mentorship of Dr. Sadayappan in the Molecular, Cellular, and Biochemical Pharmacology program. His PhD studies were focused on determining the role of cardiac myosin binding protein-C (cMyBP-C) phosphorylation in calcium handling in the heart. His research study was funded by the American Heart Association predoctoral training fellowship (17PRE33630192). He has expertise in biophysical techniques measuring contractility at the sarcomere, muscle and cardiac level. He has published over 7 publications. His postdoctoral projects involve defining abnormal calcium handling with contractile dysfunction and activation of immune and inflammatory response post-myocardial infarction using both in vitro and in vivo models. His postdoctoral studies are funded by the American Heart Association postdoctoral training fellowship (834316). 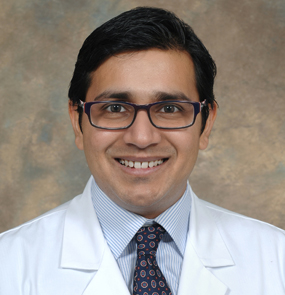 Dr. Nabavizadeh is a second-year fellow in the physician-scientist pathway for internal medicine/cardiology at the University of Cincinnati. She did her post-doctoral fellowship at the University of California, San Francisco in Dr. Matt Springer’s lab, where she worked on the effect of tobacco and marijuana aerosols on the endothelial function in rats. She joined Dr. Sadayappan’s lab in July 2019 and is planning to study heart disease in the South Asian population. Her goal is to pursue a career as a physician-scientist in the field of academic cardiology. 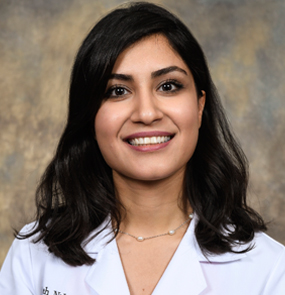 Dr. Singh is a native of India where he received his Bachelors (2009) and Masters of Science (2011) degrees in the field of Biotechnology from the University of Mumbai. He then received his PhD in Biochemistry and Molecular Biology at the University of North Texas, Denton, Texas, under the guidance of Dr. Douglas D. Root. His dissertation study was focused on alteration in the stability of myosin sub-fragment 2 by binding of cardiac myosin binding protein-C. During his graduate studies, he received several awards and scholarships, including, for example, the Beth Baird Scholarship, Academic Achievement Scholarship, and Outstanding Teaching Assistant. To advance his skills and expertise in cardiac physiology, he joined the Sadayappan lab as a postdoctoral fellow in February 2018. His current studies will investigate the structure and function of cardiac myosin binding protein-C to regulate cardiac myosin and contractility in health and disease. His research studies are supported by the Amgen postdoctoral training fellowship. 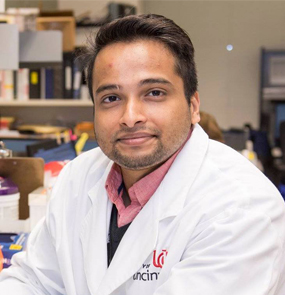 Dr, Taejeong (TJ) Song is originally from South Korea and received both his Master's (2009) and his PhD (2015) degrees in the Department of Kinesiology and Health Education at the University of Texas at Austin. Since May 2016, he has been working in Dr. Sadayappan's lab for his postdoctoral training and is focusing on the physiological roles of skeletal muscle isoforms of MyBP-C. In addition, he has been studying the pathogenic mechanism of MYBPC3 gene mutation to cause hypertrophic cardiomyopathy. His current research studies are supported by the American Heart Association postdoctoral training fellowship (19POST34380448). He loves to play tennis in his spare time.. 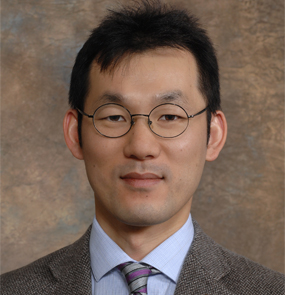 Dr. Arif received his Master’s degree (2006) from Jamia Hamdard University and his PhD (2014) from Jawaharlal Nehru University (JNU) in Biochemistry from New Delhi, India. He worked two years as a postdoctoral fellow with Dr. Rafeeq Habeebahmed at the University of Cincinnati. In August 2017 he began working in the Sadayappan lab under the mentorship of Richard Becker, MD, and co-mentorship of Sakthivel Sadayappan, PhD, MBA, and focused on the epigenetic regulations in pediatric primary hypertension. The research project entitled “Study of Hypertension in Pediatrics -Adult Hypertension Onset in Youth (SHIP AHOY)” is funded by the American Heart Association under Strategically Focused Research Network mechanism to Dr. Becker at University of Cincinnati and Dr. Elaine Urbina at Cincinnati Children’s Hospital Medical Center. Arif loves to spend time with his family and enjoys movies and video games in his spare time. 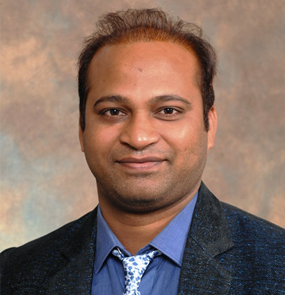 Dr. McNamara received his Bachelor of Science and PhD in Physiology from the University of Sydney, Australia. He joined Dr. Sadayappan's lab in June 2016 to determine the underlying differences between the three different isoforms of myosin binding protein-C. He also investigated the potential for cardioprotection by cMyBP-C during ischemia reperfusion injury. His research also involved defining the role of cMyBP-C phosphorylation in modulating the super relaxation stage (SRX) of myosin, and also determining the structure and function role of slow myosin binding protein-C in the skeletal muscles. His research studies were supported by the American Heart Association postdoctoral training fellowship (17POST33630095). In his free time, he loves watching cricket, cooking and home brewing. Currently, he is at Murdoch Children’s Research Institute, The Royal Children’s Hospital, Parkville, Victoria 3052 and Department of Physiology, School of Biomedical Sciences, The University of Melbourne, Parkville, Victoria 3010, Australia. 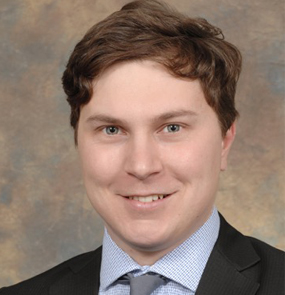 Dr. Viswanathan received his Ph.D. in Molecular and Developmental Biology and Cardiology from the University of Cincinnati in 2008 and worked as a Project Leader in the Translational Core Labs at Cincinnati Children’s Hospital for 6 years where he established the safety of two gene therapy vector products, which are now in Phase-I Clinical trials. In May 2016 he joined Dr. Sadayappan's lab as a postdoc and was working on genotype-phenotype correlation to study hypertrophic cardiomyopathy and to translate clinical research from bench to bedside. His postdoctoral studies were supported by the American Heart Association postdoctoral training fellowship (17POST33630157). 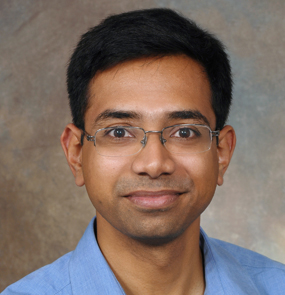 Dr. Schwanekamp received both her Master's (2012) and PhD (2017) from the Department of Molecular Genetics, Microbiology, and Biochemistry, University of Cincinnati in the laboratory of Dr. Jeffery D. Molkentin at Cincinnati Children’s Hospital. Her PhD work expanded our knowledge of periostin to an atherosclerotic disease model. She published ten articles including two first author publications in the top impact journals and received several awards such as Albert J. Ryan Fellowship and winner of the Heart Institute Research Retreat Graduate Student Oral Presentation, 2016. She joined the Sadayappan lab in July of 2017 under the NIH T32 training mechanism. As a postdoctoral trainee, she was working on understanding the molecular mechanism underlying hypertrophic cardiomyopathy resulting from mutations in MYBPC3. Currently, she is working as a research scientist at UES, Air Force, Dayton, OH. 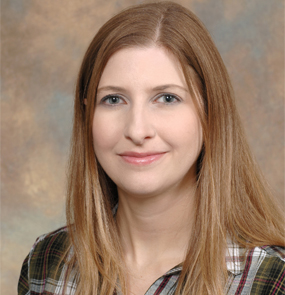 Dr. Govindan received his PhD in Microbiology in 2001 at Madurai Kamaraj University, India, and trained in cell and molecular biology in Taiwan. His work in Dr. Sadayappan’s lab was focused on the structural and regulatory functions of Cardiac Myosin Binding Protein-C to delineate the role(s) of cMyBP-C function in the heart. In particular, he focused on identifying upstream targets of cMyBP-C in order to discover novel kinases and proteases involved in the post-translational modification of cMyBP-C and its degradation, which will further define a role for cMyBP-C stability as a supportive therapy during post-ischemia- reperfusion (IR) injury. He was supported by the AHA post-doctoral training grant from Jan 01, 2013 (13POST14720024) until Dec 31, 2015. After a brief stay at Knight Cardiovascular Institute Oregon Health and Science University, Portland, OR, he moved back to India and is now the Research Head of the N. Rama Varier Ayurveda Foundation, AVN Ayurveda Group, Madurai-625004, TamilNadu, India. 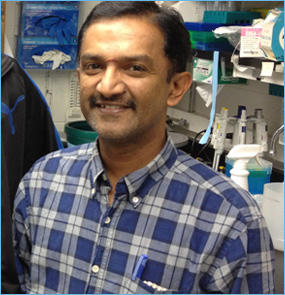 On March 01, 2014, he returned to the Netherlands where he took a faculty position to establish his research laboratory at the VU University Medical Center, Amsterdam. 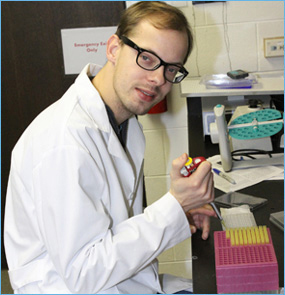 Dr. Ji received his PhD in Cell Biology from Bowling Green State University (BGSU), Bowling Green, Ohio, in May 2001. He then attended the University of North Carolina at Chapel Hill for his first postdoctoral training to determine the mechanism of precondition-induced cardioprotection from ischemia-reperfusion injury. In November 2002, he moved to Loyola University Chicago to work with, Dr. Steve L. Lipsius on the signaling mechanisms underlying -1- adrenergic receptor-mediated intracellular nitric oxide release in cardiomyocytes. He is credited with a number of publications with Dr. Lipsius, as a demonstration of his expertise in the area of calcium signaling and contractility. He has experience using adult cardiomyocytes from mouse, rat, rabbit and cat to study the calcium transients with a line-scan confocal microscope. He aimed to determine the specific effects of cMyBP-C degradation and its fragments on myosin kinetics, such as interaction with thick and thin filament proteins, calcium transients and contractility in vitro. 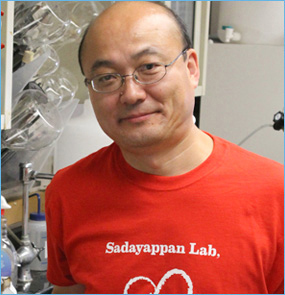 In support of his graduate studies, Dr. Muthusamy was awarded the prestigious Council of Scientific & Industrial Research Fellowship awarded by the Government of India based on the CSIR National Eligibility Test. During the course of his graduate studies, he gained in- depth knowledge in protein purification and enzyme technology. In particular, he was involved in developing a new protocol to solve the aggregation of lipolytic enzymes seen in native PAGE. In the Sadayappan lab, his work was focused on the molecular mechanisms involved in cardiac myosin binding protein-C (cMyBP-C) phosphorylation-mediated cardioprotection during ischemia-reperfusion injury. At the Second Annual Myofiliament Meeting, which was held in Madison, WI, in May 2010. Dr. Muthusamy won an award for outstanding poster presentation on cMyBP-C proteolysis that contributes to reduced left ventricular function and plays a key role in the pathogenesis of heart failure. Currently, he is working as a Senior Scientist at Abbott in Chicago, IL. 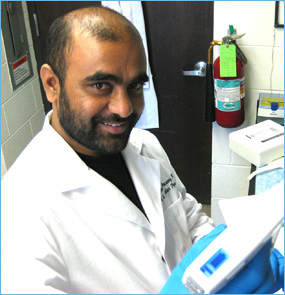 For lab research activities, news, events
meetings, conferences, symposiums
and outdoor activities,
found us and like us
at Sadayappan Lab Facebook